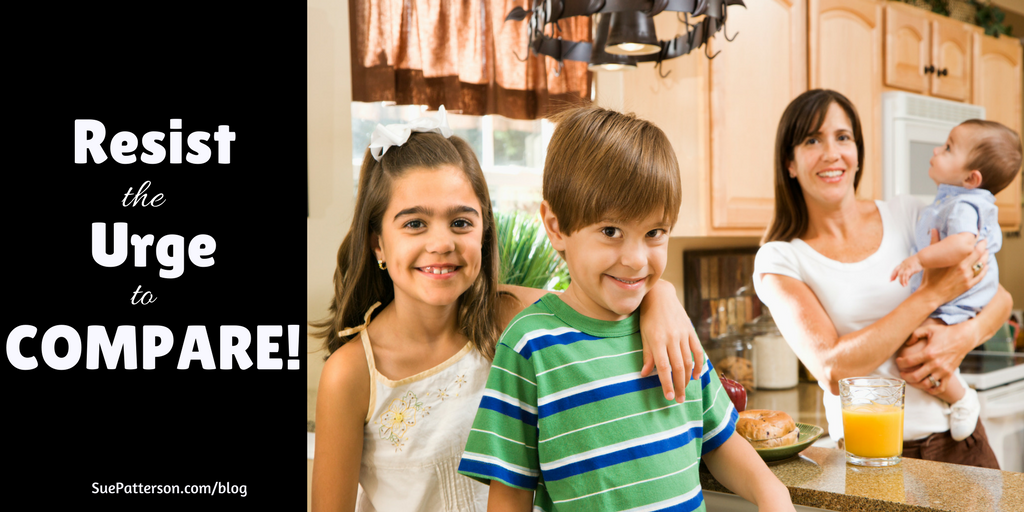 We’ve all read enough parenting books to know that comparing children is a bad thing. Maybe we’ve even been the victim of this kind of parenting ourselves?

So when it comes to unschooling our kids, why do we continue to make comparisons between our children and other people’s children?

My son isn’t reading at the same level as other kids his age.

Her daughter is so into journalling and mine won’t pick up a pencil!

Their family is out exploring the community together, while mine resist anything that involves leaving the house!

Sound familiar? Actually, the list could go on and on!

Lot’s of mainstream parenting advice list the drawbacks for these kinds of comparisons:

In spite of knowing that comparisons are bad, we just can’t seem to stop ourselves. Why is that?

You’re doing something very different from The Norm.

It’s one thing if you’re duplicating school at home – then you have benchmarks you’re aiming toward. But when you unschool, you’ve ditched the benchmarks. When you allow a child to explore their interests and follow their curiosities, you have no idea where it will lead. Setting up standards and yardsticks would be a waste of time – time that you could be in there connecting and fueling their interests!

So you’re stepping off The Path and frankly – if you’ve spent any time in school at all – you’ve been conditioned to believe that that can only lead to disaster!

You don’t do well with judgements.

Maybe you have people talking to you about how your kid is “behind.” Or maybe it’s just voices in your head from years of micro-criticisms (and maybe not always so micro!) In either case, you’re not feeling all that confident and those voices are like sharks smelling blood. They’re moving in on you. Yikes!

Even as one of the most well-intentioned parents, you can sometimes fall into the idea that your kids are a reflection of you and your parenting choices. It’s a big responsibility to do something very few (at least locally) seem to be doing.

The internet is full of parents who show us how they see their kids as extensions of themselves. And not just the internet – though that makes our circle ever-widening – but articles in the media, conversations in the neighborhood, and of course those bumper stickers with “bragging rights!” So much ego! And so many moms and dads living vicariously through their children, encouraging them to do the things that they never did themselves. It’s a mess. You have the opportunity to clean off the lens and see your own motivations more clearly. What’s that Oprah quote? “When we know better, we do better!”

If you find yourself worried about what others might think, find someone you trust to talk with about it. Uncover what’s really bothering you, or how the criticism may not even be valid. We talk about some of these things in my private coaching groups, for anyone interested.

You may need more foundation work.

When we first started out, I had a friend who told me, “Create your own personal philosophy about education, children, and parenting. What do you believe?” When you’ve taken the time to do that, you’ll find that your foundation is stronger. You won’t be unschooling because someone else’s kids turned out cool. You’ll be doing it because you know it’s right for you. Maybe My Unschooling Manifesto can help you get your wheels turning about what YOU believe.

Society has a strange preoccupation with competition.

I’m not sure what the source of this is, but it’s certainly prevalent.
Sometimes parents will say that the competition is inspiring to their child, helps them work harder, or even keeps them from getting cocky. They believe there’s such a thing as “healthy competition,” and that it will build character or produce excellence. But that’s not what is actually happening. Competition often undermines cooperation as kids are conditioned to believe that triumphing over someone else is the goal. Alfie Kohn writes that competition is inherently destructive and explains more in his article, The Case Against Competition. Kohn’s first book, No Contest, explores the research on the negative effects that arise in a competitive environment.

Our goal – or at least my goal as an unschooling parent – was to help my child feel good in their own skin. I wanted them to know that they have gifts and strengths to offer the world that are completely separate and unrelated to what other people’s gifts and strengths are.

So what are the takeaways here?

It’s easy to get caught up in the hustle and bustle of raising a family. But bringing these thoughts back to the front of our minds reminds us of how we might want to make some changes. Talking about these ideas with others who are on this same path, may help you continue on creating the best environment for your family.

Need some help with this?

You're not alone! This is sometimes a difficult shift to make. But you have some options that might help: