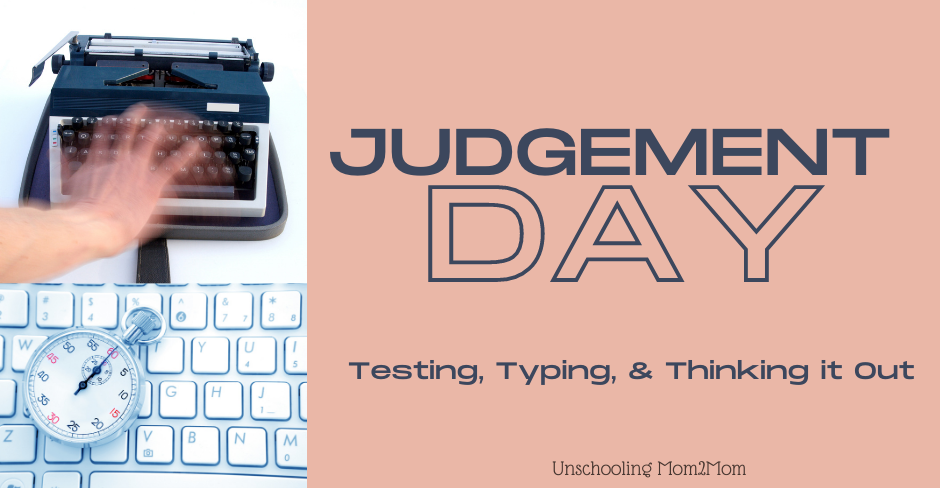 I haven’t used a standardized test on my kids...yet. I’m still trying to decide if the "goods" outweigh the "bads."

I think to myself...Testing is inescapable in our society. What’s the big deal? Just go ahead and test the munchkins.

I mean (I mumble subliminally), we are often judged in our society. We’ve all been judged by our looks, by our behavior and most definitely on how well we perform on written or oral tests. The judgments are often superficial. People with a healthy self-image find such one-dimensional measures bothersome, only if failing muster keeps us from a sought-after goal.

My children are not going to be able to avoid all standardized tests. There is the DMV’s driving test to look forward to, along with college midterms and professional certifications.

IF I do decide to formally test the kids, it’ll mainly be so they can learn and practice test taking itself. To that end, standardized testing my boys every year or two would have some value, if practice does indeed make perfect.

All the same, I have an instinctual dislike for standardized tests. My oldest son took many a standardized test before we started homeschooling over a year ago. What did those scores really mean? He scored really high on this and even on that. "Good boy!" said the school and parents.

But what, really, did those scores mean? They just said he was good in this and that, but those scores said nothing else. I am afraid that we are all going to get so caught up on testing and making SURE we know the basics of language arts, arithmetic and so on, that we will over-dedicate the limited time, energy and resources of our schools, teachers and families (yes, I mean homeschoolers,too) in the pursuit of straight As and 96th percentiles.

Tests, in themselves, are just an exercise. They can be useful.

Maybe I want an accurate, impartial gauge of improvement in speed, for example.

I take a speed test.

I’m doing good! Now on paper, I look like I’m making the grade. I’m showing improvement - I’m hot, man!!! Compare me to all the other ladies in the neighborhood who also took the same standardized speed test and wow! I’m now in the 80th percentile.

So what does THAT mean?

It means that I can type that particular bunch of words on the test faster and more accurately than 79/100 other tested typists. And about 20/100 are still better typists. Of course, luckily, there weren’t too many numbers in my test paragraph, or I would have done much worse since I have to look at that row of keys. And good thing I was familiar with that kind of test from all my practice tests. I would have been a lot slower trying to type an excerpt from a technical journal.

Now, I do type the test faster and more accurately than when I first started taking the tests. Just the practicing reinforced my basic typing and test-taking skills. This is a good thing.

But while I was obsessing with my speed-typing, my (pretend) neighbor Shirley had been doing some speed drills. She improved, going from 25 to45 wpm. But then she got interested in changing the fonts in her program. This led to her exploring deeper into her word-processing tutorial, which led her to reconfiguring her page layout, which led to her learning more about desktop publishing, which led to her becoming a more computer-literate real-life capable person than she had been before all this fun exploration began.

Now, Shirley can’t type as well as me (hee, hee, she’s just in the 67th percentile).

But, whenever something goes wrong with my Windows upgrades, I call my buddy, computer-guru Shirley, to help out. Too bad she doesn’t get extra credit for being a computer geek, huh?

Oh, and then there’s Georgia, the lady across the street. She’s in the 95th percentile. She thinks if Shirley and I were more disciplined and dedicated, that we could be really good typists, like her. She quickly and easily got a job as a secretary. I mean, that woman can type!

But then, Shirley got hired, too. And after a while, although it took Shirley a while to prove herself, she’s now Georgia’s boss.

If we teach to the test, yes, our scores may be higher. But then there isn’t time for watching the ant hill in the front yard with the neighbor kids or marveling at the insect’s tiny yet gargantuan strength. Reading about the complexities of bug socialism will have to wait until that all-important spelling test has been studied for--again.

Natural curiosity becomes a luxury we can’t afford when we must first get all of our "real" work done.

When my kids are ready to launch forth, out on their own, into our wonderfully intricate world, I’ll have to ask myself some questions and worry: will they know how to think, learn about and adapt to our rapidly changing world?

Or will they just be good testers?

Donna Courreges wrote this essay for the Chart & Compass, in Alaska, in the 1990s.
Chart & Compass was edited and published by Sue Patterson way back when...