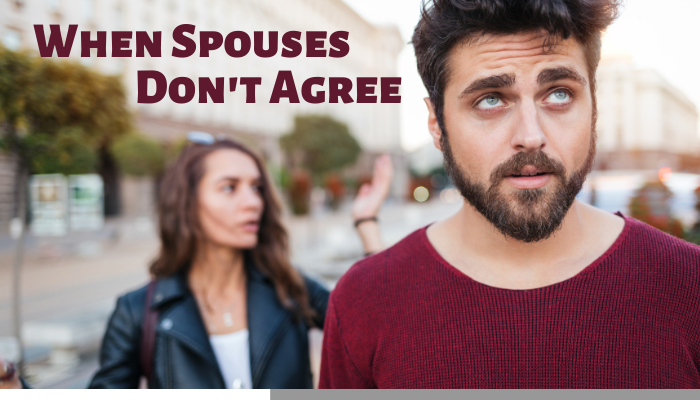 That's exactly what my spouse said when I brought up the subject of homeschooling.
"Absolutely. Not. My. Kid." (he actually said it twice).

First and foremost was, of course, the 'SOCIALIZATION' issue. He said he didn't want our kids to be 'those weird, awkward, unsocialized homeschoolers,' like that homeschooled kid he saw interviewed by Katie Couric who had won the Scripps Spelling Bee. (Little kid on national TV was awkward...can you believe it?!?)

But seriously, I heard his concerns, and I addressed them by explaining that homeschooling does not make a kid become awkward. But, truth be told, there are a lot of weird and awkward homeschoolers, and that's because they left school after they were bullied so much.

You're either awkward or you're not, and homeschooling won't change that.

I listened to his concerns, and I took action to remedy the situation. I dove right into it and got involved with our local homeschool group. I pretty much likened it to the kind of effort I would put into my kids' classrooms and school functions if they had been in a traditional school setting.

And it was great...we quickly made some fabulous friends and checked the socialization box

But there was more needed to help my husband see this through.

I knew for certain that I didn't want him to feel lectured to or that his opinion didn't matter (our boys were also only 2 and in-utero, so I knew I had some time to sway him). If all else failed, I figured hearing from our friends and neighbors about the many ways in which they struggled with school (the stress of getting them out the door on time every morning, the inadequacies of meeting the individual students' needs--especially for kids who have learning differences, the uninspiring curriculum, the banality of it all, etc.), would lead to jumping off points to continue to plant seeds for him.

As it turned out, I didn't have to wait long. A few weeks later, we had the chance to meet another homeschool dad in the community, and my husband talked to him at length about their experiences, and that's the day he started saying that we were homeschoolers.

Up until that point, it was maybe (and I think he mostly said that just to keep the peace...I could tell he really wasn’t committed to it. He just couldn't imagine a childhood without school).

But even still...he felt homeschooling was good enough for the preschool years (saving money didn't hurt either), and he figured Kinder and the younger grades would be OK, too.

But there was a nagging feeling for him where he couldn't quite reconcile the idea of giving up High School (no PROM? No SPORTS? No SENIOR YEAR?!? Again, I realize I have time to address these concerns).

Fast forward a couple of years, and we attend our first conference.

My spouse was awestruck by the unschooled teens. He stood there looking at this motley crew of kids, all so comfortable in their own skin, who spoke as easily with adults and young children as they did with their same age peers, who all seemed to march to the beat of their own drum yet somehow also weren't loners...it's really hard to describe, but whatever IT was, it was palpable...you could FEEL their awesomeness, and my husband literally choked up with tears in his eyes as he began to imagine giving our boys the opportunity to be that awesome.

If any of you were to meet him today, you'd never know he was so reluctant because now he's a loud and proud outspoken advocate for homeschooling and will happily talk to any dads who are curious to know more!

Reluctant Spouses - When You and Your Spouse Disagree about Unschooling

Getting Your Spouse Onboard with Unschooling - Guest Blogger: De Smith

Need More Help with This?

The Unschooling Guide: Critics and Naysayers is full of ways to overcome all the obstacles that show up when you have family and friends that aren't happy with your decision. Journal pages to help you figure out what's really going on, as well as examples of responses and ways to handle a variety of dicey situations. 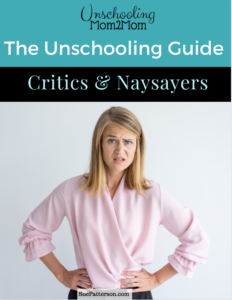 One thought on “When Spouses Don’t Agree About Unschooling”