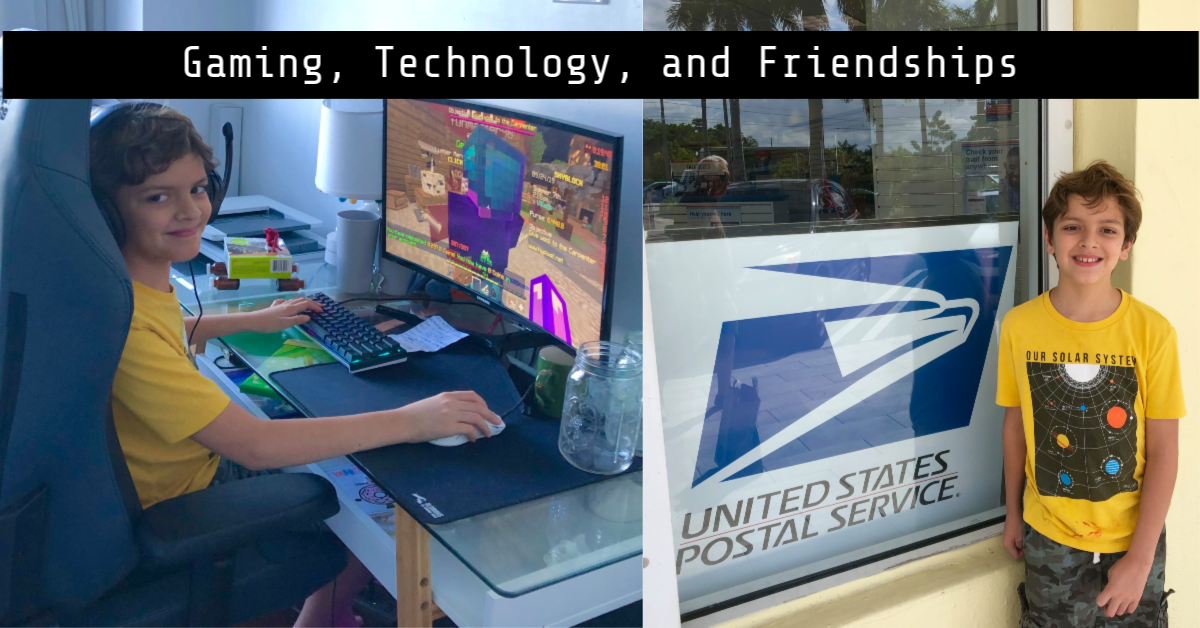 Guest blogger, Belinda Bonham Carter, noticed how many stories exist about how technology disconnects us, its ill effects and how gaming in particular can be harmful. This story is not that perspective.

Sixteen months ago, relatively new to homeschooling, I took an online discussion/seminar class focusing on child-led learning. During the class the subject of gaming came up, and someone mentioned a Facebook group that helped the parents of gaming homeschoolers connect their kids with other gaming kids. It was summer and my son was dying for kids to play with online. I posted in the gaming group and soon we got lots of user names of kids.

At first it was hit or miss, but there was one boy that stood out amongst the kids. My son instantly had a synergistic connection with him. Just a few days later laughter filled the gaming room. They were a perfect match. He was also a quirky computer kid, they had the same humor, the both talked non-stop.

The summer months passed, homeschooling life picked up, but the boys always found time to play, sometimes for hours at a time. I knew each day we had to build in blocks of time for this to happen, because it was so important both of them. They cycled through various games.

I soon learned it wasn’t the games, it was the true connection and giddy fun that brought them to the screen each and everyday. Curious about this mysterious world, I would deliberately come into gaming room and work in my laptop. I overheard conversations about anything and everything and more laughter so much laughter. I watched them send funny memes and silly jokes over discord. I watched my son prevail in social situations (when groups of them logged on) that he hadn’t been able to be successful in real life.

I watched those skills translate, almost instantly, to real life.

I got daily updates about the boy and what restaurants were in his town, what homeschooling classes he was taking, what he did that day. One day, after not messaging the boy’s mother for several months, I wrote to her to tell her how I was so happy to have her son in our lives. She told me how much the friendship meant to her son as well. During this exchange she shared that her son had Lyme disease, and that during times where it would flare up gaming was the only way he was able to connect to outside world. I once again relished this unqiue friendship made possible by technology.

Months passed, months turned into a year, more months passed. The boys rarely ever missed a day, unless one of them was away or it was some kind of holiday.

Then last week something happened.
The boy was not online.

First for one day, then two then three and four. My son was devastated, and very worried. I messaged the boys mother and learned that the boy was having a Lyme relapse. I told my son that the boy was not feeling well and not able to play.

On Day Five, my son lost it. He cried and sobbed. I didn’t want him to feel powerless to the situation, so we brainstormed. He decided that given the distance sending a care package was the best option. He wanted to make it special.

He stayed up making drawings, he bought art supplies and painted canvases, he made ink coasters, and for some fun things he asked if we could buy pop models, and graphic novels. The whole time he kept saying I feel better because I know this will make him happy. I just miss him so much, he’s been such a good friend, I love playing with him so much.

The narrative of technology, disconnection, screens and harmful effects is the one that’s most pervasive in our society.
I offer a different perspective, one that I needed my son to show me:  One of empathy, real friends, and true connection.

Belinda Bonham Carter resides in Florida with her three children and loves living and learning, embarking on adventures, and sharing the unschooling journey with her children.

Have you seen social benefits in your children while/because of online gaming?
Share your examples in the comments.

2 thoughts on “Gaming, Technology, and Friendships”