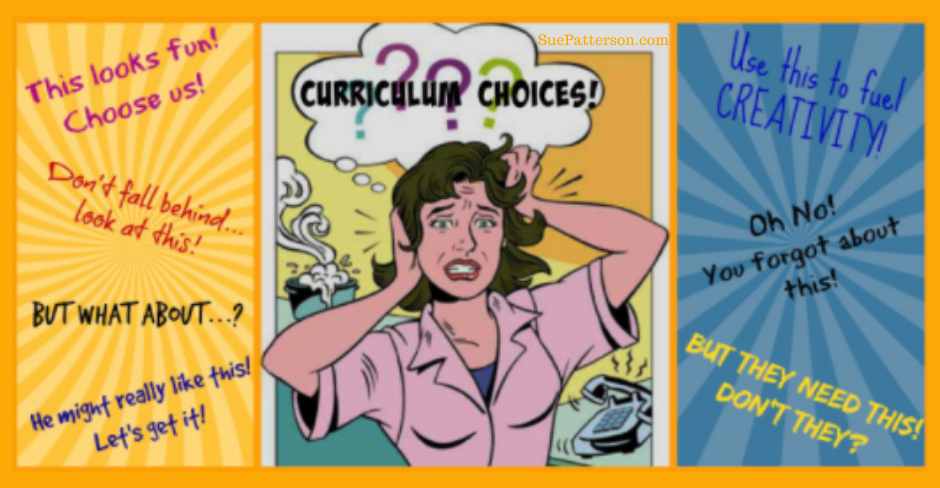 Back in the ’90’s when the internet was still young…
We had loaded up our car in San Antonio and we were moving to Alaska. Really. We were. My husband was in the Air Force and we had decided that on this move, we’d make the break with the school system and set out on our homeschooling adventure!

An exponential shift seemed to be happening.

When we first considered leaving the school system, we could find only religiously-oriented catalogs to help me figure out more about homeschooling resources. The internet wasn't as it is today, overwhelming us all with options. So, there I was, combing through The Elijah Company catalog – they had some awesome science kits. Or I’d scan the list of Sonlight for an enormous array of literature. And even after we had started homeschooling (because we did not start as unschoolers), I looked at Cathy Duffy and Mary Pride’s gigantic books of curriculum options.

It was like Alice falling down the rabbit hole!

I could visualize my little guys (then 7, 5, and 2) diving into a semester’s worth of curriculum with enthusiasm and glee. The story I had created in my head of what that would look like – with the help of all those curriculum pushers – was divine.

The more I discovered, the more inadequate I felt.

My bookshelves began to bulge. I started talking to other people about all of their curriculum choices. Entire park days were spent comparing and contrasting everything anyone had run across. It felt so frenetic. We were so worried we’d do it wrong, choose poorly, or spend our money on something that would sit on the shelf unused. Yet we were pulled to continue our quest for curriculum that would perfectly fit our little ones.

The friends we kept didn’t help our situation. (yes, I still love them dearly). But this time period was also the early years of something called The IDEA Program. Someone had just figured out a way to get kids signed up into the school system yet still remain homeschoolers. They’d make their daily allotment per child, and they’d let these kids – our kids – be “distance learners.” They supplied our curricula, and even gave us a new computer. It was the birth of Charter Schools.

These were the days of dial-up, weird noises as you waited to get connected, and “You’ve Got Mail!”

As unschoolers, we were skeptical. People were warning us that we weren’t “real homeschoolers” if we used these programs.  In fact, they were right, we were part of a school district. But it was hundreds of miles away and no one ever darkened our doorstep. As a small group of parents, confident in our unschooling by this point, we decided to see what would happen. The administration assured us that we could interpret learning in whatever way we chose.

We swung over to the local Holiday Inn where they were handing out computers for every family enrolled. It was so disorganized, they were handing these desktop computers out hotel room windows! It definitely looked shady, but we shrugged and accepted the loot. We met at our monthly Moms’ Night Out meeting, comparing notes. We knew that when they’d ask us to do testing, we’d pull out of their program. That seemed to be the line we were drawing. But for now, that wasn’t the case at all.

So we put in orders for Playmobile to study Medieval times, nature center and science museum memberships, horseback riding lessons and whale sight-seeing trips. Lest you think we were simply bilking the system, we only received a fraction of the money that the school district received for enrolling us. What we didn’t get to use, built a new school for one of the native Alaskan villages, giving them small planes to work on so they could learn mechanics. (Small planes are used all over Alaska, so this is a trade they’d be able to use.) It paid for teachers and personnel to staff these new schools. And our kids were learning tons every day, playing, exploring and discovering.

We were still new to unschooling/homeschooling and even though I was quickly embracing the idea that I didn’t need school experts to teach my children, I didn’t notice the tightening grip of curricula.

As the millennium turned and we left the 90’s, the internet opened up. We weren’t limited by what our neighboring homeschoolers had personally found - as had been the case when we started out – we could search online or ask in email groups. We even created lists and forums that reviewed products and shared obscure potential resources.

We were downright giddy! We made purchases – the packages were appealing – bright colors, engaging promises, cartoon-like characters. Each seeming to shout, “Choose me! I’m the solution you’re looking for!” And I believed them – so many times!

It’s as if a magnetic force field kept pulling us back! We knew we didn’t want to send our little ones off to the local school… but the stuff! It was so appealing.

And our own anxiety was there too… sometimes coming in as whispers, other times, a screaming banshee in the night! Now in hindsight, I can see that we simply hadn’t cut the cord.

Curricula had become a crutch.

Sure, the toys and the memberships were used a lot, but a whole lot of other curricula that we were going to “try out,” went unused. Life got busy with three kids going in three different directions and we moved again – with all our stuff. As time progressed, that program tightened up, requiring tests and progress reports… so we bailed. Bureaucracies being what they are, no one ever asked for the stuff back.

So now that my kids are all grown, I sit here with shelves in every room filled with dusty books, some unopened even. My kids are grown and gone.

What did I learn from all of this? What wonderful words of wisdom can I share with you?

So… I wonder how many trips to Goodwill this is going to take?

Time to get started. Wish me luck!

The Mom's Night Outs that we enjoyed when my kids were younger are few and far between these days. But something similar - and equally helpful - has been a great substitute.  Virtual Groups mean you don't need to get a sitter, you don't even need to get dressed! And yet your confidence can grow just like mine did with our get-togethers!

Creating Confidence is a small online community where we really get to know and support each other. Each week, we hop onto a Zoom conferencing call and talk about how it's going.  I'm in the group all week long, but love our Monday livestreams and our Wednesday coaching calls! They're even recorded in case you miss it!
Join us! There's no big commitment. Stay as long as you like.